The day that Eilidh Duncan met Senior Staff Nurse Lynsey Grant is one that Eilidh’s mum Rhona will never forget.

“The first couple of years of Eilidh’s life were really hard because we didn’t know what was wrong with her,” says Rhona. “She was admitted to York Hill hospital when she was just a few weeks old and we were lucky enough to meet Lynsey. 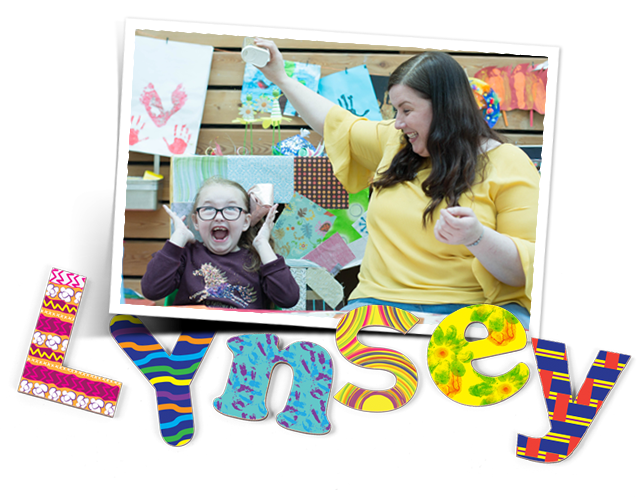 As one of the more experienced nurses at York Hill, Lynsey was an amazing support from day one and we formed an extremely close relationship with her and she made the long stay in hospital bearable. She helped Eilidh so much but she was such a support for me too. She helped me take in what was happening and assured me that things would be okay.”

Six-year-old Eilidh was eventually diagnosed with an incredibly rare condition called intestinal pseudo obstruction with intestinal failure. It means that her muscles and nerves in her intestines don’t work correctly so she’s dependent on something called a Hickman Line that runs through her main vein into her heart to feed her. As well as the line, Eilidh also has a drain in her stomach and an ileostomy stoma to collect her waste.

Once Eilidh was officially diagnosed and discharged from hospital, she was referred to CHAS’s Robin House as her illness was life limiting and threatening. To be referred to a hospice is a frightening time for any family but upon visiting Robin House for the first time, Rhona’s fears were soon allayed.

“When the specialist nurse first approached us about it, I almost didn’t want to consider going because I felt like they were telling me that Eilidh wouldn’t be around for much longer,” she said. “But when I walked into Robin House, I changed my mindset completely and realised it was nothing like I thought it was. The staff, the house, the understanding, the inclusion. It’s just overwhelmingly positive, nothing at all like I imagined. The word hospice can scare a lot of people, including me, but CHAS are so much more than that.”

And once Eilidh and her family settled into Robin House, Rhona was delighted to learn that she would be reunited to Lynsey, who was joining the CHAS team.

“When we found out that Lynsey would be looking after Eilidh in Robin House, it was the best feeling ever,”

“When we found out that Lynsey would be looking after Eilidh in Robin House, it was the best feeling ever,” says Rhona. “It made us all instantly relax as we had such a good relationship with her and Eilidh has known her since she was a baby. Having Lynsey in Eilidh’s life again, along with the sheer positivity of Robin House, made her referral to a hospice so much better.”

Eilidh and Rhona’s close relationship with Lynsey extends to the nurse being the only person outside of immediate family to operate Eilidh’s line.

“I don’t let anybody touch Eilidh’s line. Myself and her dad are the only ones who do because there is such a high risk of making mistakes and it can be quite dangerous,” says Rhona. “However, when we got married, Lynsey offered to work with Eilidh for two days to allow us to go on a honeymoon so she carried out Eilidh’s procedures. It’s the only time I’ve ever left Eilidh and I was only able to do it because of Lynsey. It’s also because Eilidh loves and trusts Lynsey so much that we were able to go. Eilidh’s been through such a lot in her little life that she can struggle to trust people. But when it comes to personal care, she doesn’t have any qualms about Lynsey.”

For Lynsey, operating Eilidh’s line was a privilege, “It’s a highly skilled task and Eilidh’s parents do it beautifully at home,” she says. “It’s understandable that they are protective of it as the more people who have access, the more potential there is for infection so I am the only one in Robin House who the family allows access to and I was very happy to do it to allow Eilidh’s mum and dad to have a honeymoon. I see it as a real privilege to be trusted in that way.”

According to Rhona, Lynsey can tell when Eilidh hasn’t had a good day and knows instantly when something isn’t quite right, even with other members of the family. “When I was pregnant with my little boy, Cailean, she realised that I wasn’t right and phoned a taxi to take me to hospital,” says Rhona. “It turned out I almost had a blood clot in my leg and it was only because of Lynsey noticing that I wasn’t quite right that I went to the hospital. She notices everything and goes above and beyond.”

The feeling is mutual as far as Lynsey is concerned. “Eilidh is just fantastic,” she says. “She’s one of the reasons why I love my job so much. She loves glitter and princesses and is a joy to be around. You get all the responses from her and she lets you know if she’s happy or she’s had a good day or not. She has time for everyone and always has a story to tell. She’s a very happy girl.”

Rhona says: “It sounds really corny, but Lynsey and CHAS basically gave us hope. They gave us hope and reassurance when we needed it most and I’ll never forget that.”

It’s nurses like Lynsey that make CHAS so special to the families who use its services. The charity is urging the people of Scotland to donate and help recruit more nurses like Lynsey and reach more children throughout the country.

Help us reach out to more children.

For over 25 years, CHAS has been offering a full family support service for babies, children and young people with life-shortening conditions.

Your gift today can help us be there for the families who need us and make sure that, no matter how short a family’s time together may be, it is a time filled with happiness and fun.