For more than 20 years, CHAS has been supporting families across Scotland who have babies, children and young adults with life-shortening conditions. The charity and families they support, hail the nurses as their heroes.

One of these hero nurses is 47-year-old Derek Jolly, who is a Trainee Advanced Nurse Practitioner based at Rachel House in Kinross. In his five years of working with CHAS he’s supported countless families with children who have life-shortening illnesses. 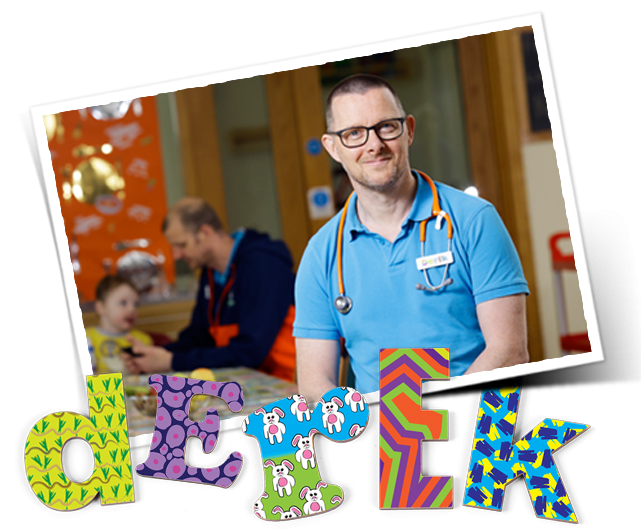 Derek takes the time to get to know the people behind the illness and works to ensure that their days spent with their loved ones are as fun and as comfortable as possible. Rachel House, in Kinross, is a 'home from home' for families. It has a range of facilities including a jacuzzi, art and music rooms, large accessible garden and lots of areas for relaxing and fun. It also has areas for reflection, bereavement support and care.

For Derek, working in the healthcare profession is something he's wanted to do from a very young age. "Whenever I was in the hospital as a child, for various cuts and bruises, I always loved chatting to the nurses and doctors and was fascinated by their work," he said.

"When it came time to chose a work placement at school, it seemed obvious to me to try nursing. On the second day, I met an older man and got chatting to him. He told me really interesting stories about his life and the war and we really bonded. At first glance, you would think he was this poor old soul with not much to say but I felt so privileged to be allowed into his life like that. That experience cemented my desire to go into nursing and help people. I did a lot of work experience first off and it was a really good grounding for me. Some people have a romantic view of what nursing is but it's actually a lot of hard work and a lot of heartbreak but the rewards far outweigh that."

CHAS nurses pride themselves on not letting anything get in the way of their work and Derek is certainly no exception. The unprecedented snow Scotland experienced in March is a prime example.

"We had a child who was being treated for end of life care at Rachel House and it was crucial that we were there for the family at that time," he said. "I was snowed in at home but managed to contact a friend with a 4x4 to drive me to work. We picked up another nurse on the way who had offered to cover a night shift as so many people from further afield were stuck, and I stayed at Rachel House to be with the family and look after the child for four days. We all have the same mentality at CHAS, if something needs to be done, we get it done."

"It's a privileged role in a way because I'm on the medical rota but still very much a nurse. I can cover the medical aspects of a rota but still have a nursing head." Once fully qualified, Derek would like to utilise his advanced nursing practice knowledge to help with research for CHAS to boost what practices they already have as well as discover new ways of performing palliative care.

It's Derek's advanced practice training and nursing care that make him so popular with families at Rachel House.

Gill White is mum to Leo, a two-year-old with a condition known as Ohtahara Syndrome, a neurological disorder characterised by seizures and severe developmental delay. Leo is non-verbal and requires round-the-clock care. The White family have been supported by Derek and Rachel House since 2015.

"Derek is just wonderful. If we didn't have his support along with the facilities at Rachel House, we would have missed out on so much for Leo."

"Derek is just wonderful," says Gill. "If we didn't have his support along with the facilities at Rachel House, we would have missed out on so much for Leo." The family were first introduced to Derek at a time where they didn't believe Leo had long to live.

"In December 2015, Leo's breathing was deteriorating and it was a really scary time," said Gill. "We had to think about funeral arrangements and how we wanted Leo to spend the last few days of his life. It was obviously a very emotional time for us but Derek went through the plan empathetically and made it really personal for us. We'll never forget the kindness he showed us at such a horrible time."

Luckily, Leo pulled through and Derek has continued to work with the family and has formed a special bond with Leo.

"Derek always puts Leo's quality of life first and suggests ways to make him more comfortable - he even arranged for Leo to try medicine that was not able to be prescribed by the hospital," Gill said.

"He took the time to research a medicine called Atropine - which is normally used as an eye drop - to treat Leo's excess saliva. Leo was unable to use the medicine normally prescribed for this as it could have triggered a chest infection so Derek sought expert medical advice, spoke to the pharmacist and arranged for Leo to try the drug at Rachel House to be monitored. It was a huge success and has made a real difference and it was all down to Derek."

As well as the expert advice and personal care they receive from Derek, the family also use the facilities at Rachel House in Kinross often and say that the services are invaluable to them.

"Before we discovered Rachel House, we were guilty of wrapping Leo up in cotton wool," Gill said. "At Rachel House though, Leo is treated like any 'typical' child. It's like a nursery environment for him as he gets to play, make music and paint and even have a dip in the jacuzzi! We can also leave him there for the day and know that he's in such safe hands. Because of his condition, we can't use babysitters or playgroups so to be able to leave him at Rachel House and go and enjoy some time to ourselves is priceless. It allows us to do the little things that we used to take for granted."

One of the hardest things for nurses like Derek is helping the families prepare for end of life. All CHAS nurses are committed to making sure that no matter how short a time a family has together, it should be filled with happiness and fun.

"We all know that life is precious and at CHAS, we're about maximising the potential for that child and family to have the same wonderful experiences they might have with a child without a life limiting illness," said Derek. "In the time I've worked for CHAS, some of our children are discharged. They come to the hospice with the thought that they will die but it's not an exact science, treatments move on and you just never know.

"It's all about supporting people while they need us. However, it took me a good 20 - 25 years to realise thought that if a child does dies, it's not a failure. Of course, we want to save every child but medicine isn't that advanced yet and we can't. It's hard to accept but the important thing is to make the most of now, and that's what we do at CHAS."

Help us reach out to more children.

For over 25 years, CHAS has been offering a full family support service for babies, children and young people with life-shortening conditions.

Your gift today can help us be there for the families who need us and make sure that, no matter how short a family’s time together may be, it is a time filled with happiness and fun.