Scottish actor, director and writer Peter Capaldi has donated a one-off, personally illustrated script for an online charity auction to celebrate the return of Edinburgh's Capital Sci-Fi Con this month. 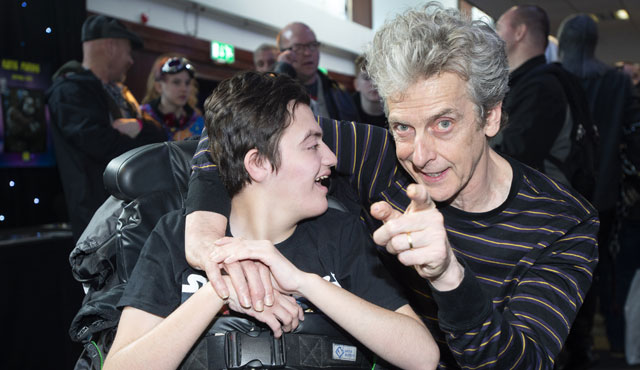 All proceeds will go to CHAS - a cause for which Capaldi has become a stalwart advocate.

Now in its fifth year, the city's only not-for-profit family friendly pop culture, comic and movie convention is organised for fans by fans and is set to take place on Friday 14th to Sunday 16th February. 2019's event attracted nearly 10,000 visitors, coming from as far afield as Brazil and Norway. Capaldi notably donated a full day of his time to raise money for the charity, belting out David Bowie classic 'Starman' to the masses and refusing to leave the building until he'd met the last fan. It raised over £62,000, taking the overall total which has gone directly to CHAS to an out-of-this-world £250,276 since 2016.

Guests appearing at the 2020 edition include patron and Star Wars legend Angus MacInnes, Harry Potter's David Bradley, sixth Doctor Who Colin Baker, Game of Thrones star Ian Beattie and many other personalities from the worlds of science fiction and fantasy. There will be cosplayers, talks, comic book artists, memorabilia stalls, interactive replica prop sets from The Avengers, Batman, Star Trek, Jaws, Gremlins E.T. and much more. Additional guests and features will continue to be announced in the run up to opening day on Friday 14 February. 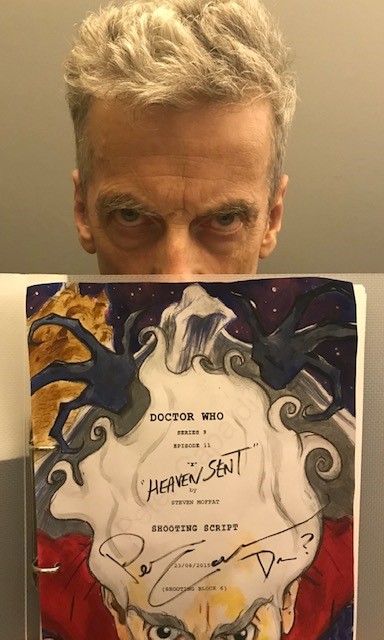 Peter Capaldi said: "This is a shooting script for "Heaven Sent" - or "X" as it was known at the time. Reading the full script gives an insight into Steven Moffat's beautiful work, as well as that of Rachel Talalay the director and our wonderful crew. I've painted a picture on the cover because it's a fun thing to do and, for Doctor Who collectors, makes it an absolutely unique item. "I'm sorry I can't be with the CHAS team at Capital Sci-Fi Con this year, but hope this is a little reminder. Please support their amazing work."

Fiona Leslie, Senior Community Fundraiser at CHAS, said: "Peter has been a beacon for CHAS since he kindly accepted our invitation to last year's Capital Sci-Fi Con, where he to meet hundreds of fans as well as some of the families who find respite and care though either Rachel House, Robin House or our CHAS at Home provision.

"Besides his acting and musical talents, fans might sometimes overlook the fact that Peter is also an exceptional artist. We are privileged that he has given us this customised, personally illustrated script to auction off to a lucky fan. We extend thanks to Brian Cox and Sylvester McCoy for their generous contributions and of course the Star Wars memorabilia collectors who have dug deep into their personal archives to donate rarities for auction.

"We are also indebted to the science fiction community and particularly Keith Armour's team at Capital Sci-Fi Con for everything they do to raise awareness and funds for CHAS throughout the year. "Inclusivity, affordability and accessibility are crucial to Keith's team and the convention - it has been heartening to see people from different corners of the globe, as well as the science fiction community at large, united by this phenomenal event. Tickets to the convention are selling fast so we would advise fans to book now!"

Tickets are available to buy now via www.capitalscificon.co.uk/tickets.html.