Help dying children and their families this Christmas

Today marks the launch of our 2021 festive fundraising appeal; urging Scots to support dying children and their families this Christmas. 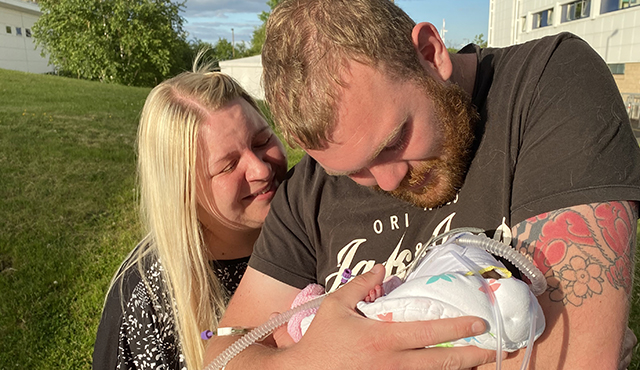 Now more than ever before, CHAS is determined to reach every single child who needs their help and the charity’s Christmas appeal, which includes a radio advert and television advert, powerfully depicts the heartbreak faced by families whose children die young.

One couple who were supported by CHAS are Gemma Munro and Andrew Couper from Kirkcaldy, Fife, who lost their beloved baby daughter, Georgia on 7 June 2021.

Georgia was born at 25 weeks and six days and spent most of her short time in the Neonatal Intensive Care Unit in Edinburgh before finally moving to Rachel House in Kinross where she received dedicated end of life care.

As soon as Georgia was born she had to be put on a CPAP (Continuous Positive Airway Pressure) machine and then a ventilator to help support her breathing and lung development.

Gemma recalls: “During this time we were made aware of a few bleeds on Georgia’s brain due to extreme prematurity.

“Over time, they continued to do more head scans and we got the sad news that Georgia’s ventricles had also burst. Doctors sat us down and explained this could lead to potential disability in Georgia, but as her parents it didn’t faze us as Georgia was our daughter and we would support her whatever the outcome of disability in the future.”

Despite all her challenges Georgia began to show some encouraging signs of improvement and was transferred from the Intensive Care to the High Dependency ward and was also moved off the CPAP to high flow oxygen supply.

Unfortunately further tests results showed she had contracted E.coli Meningitis and the tiny tot had to be rushed back to Intensive Care.

Gemma said: “Although this was a massive step back, we continued to remain positive that Georgia would fight this infection and overcome this because she was our little warrior who didn’t give up easily!

“Doctors started Georgia on the strongest antibiotics to fight off the meningitis which was a three week course. A few days into this treatment, Georgia went back onto her CPAP to help support her breathing as her little body was fighting this awful infection.

“Due to the ventricles bursting the meningitis had then spread to Georgia’s brain. She was then started on another round of antibiotics as well as the first antibiotics but after a week both of these weren’t touching the infection. Doctors had tried all they could but nothing was fighting the meningitis. Test results were doubling in infection markers and Georgia was very poorly.”

After Gemma and Andrew were told the devastating news that nothing more could be done for their baby girl CHAS stepped in to offer the family support. CHAS Diana Children’s Nurse, Evelyn Rodger and Neonatal Support Senior Staff Nurse, Emma McAuley provided support throughout Georgia’s journey both at the hospital and at Rachel House hospice.

Gemma said: “During our time in the Neonatal unit we would see Emma and Evelyn regularly, always asking how we were both doing, asking about Georgia and just showing their support. One day I went into the neonatal ward and was speaking to Emma saying it was my nephew’s 18th birthday that day. Emma said: “Well why don’t we do some prints and make a birthday card from Georgia?” It was a simple, kind gesture but one that meant the world to me. Emma made footprints and some other cards for Georgia’s grandparents.

“Doctors asked if we had any requests on Georgia’s behalf and as proud parents we asked for Georgia to meet all her close family, we also managed to get Georgia to meet her brother and sister (the dogs). We were given the opportunity that many families may miss out on due to their circumstances, to go to Rachel House in Kinross run by the Charity CHAS.

“Emma and Evelyn worked so hard along with the hospital staff and transport team to make Rachel House happen for us and Georgia. We didn’t realise Rachel House was an option but being offered this was the best thing for us as a family.

“When there, we finally got Georgia all to ourselves; we felt like a family, able to cradle Georgia and sing to her. Simple things parents take for granted but to us it was all we ever hoped for with Georgia. We just wanted to take her home and have our family life that we waited so long for but we had to make the most of our final hours together.

“Georgia spent her final hours at Rachel House, free of the hospital environment, free from all her tubes and constant buzzing medical equipment. Georgia was given the chance to be cradled like a baby, have the fresh air upon her face and taken on a walk around the garden listening to the sounds of the birds chirping.”

Georgia peacefully passed away in her parents’ arms on Monday 7 June 2021 at 9.15pm.

Gemma said: “We went through the worst time in our life but it was made a little easier having the right support around us, we can’t thank CHAS enough for their ongoing support. We returned for a visit to Rachel House on Georgia’s due date and walked around the gardens, had a cuppa and saw some of the staff. It was nice for us as Georgia’s parents to go back to somewhere Georgia had been, brought some peace and made that day a little easier.

“We are so grateful to all the staff at the Neonatal Unit for taking care of Georgia during her hard journey and also to Rachel House for making us feel so welcome. Rachel House went above and beyond to make sure Georgia’s final hours were peaceful as can be for both her and us as parents. They have been amazing, showing so much love and support to us as a family and we will be forever grateful to CHAS.”