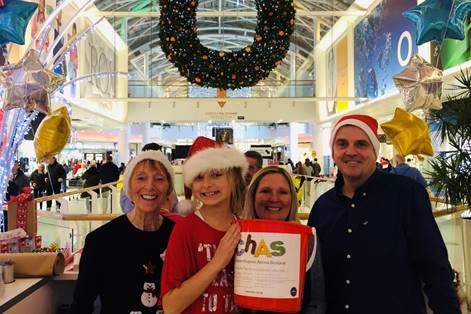 Staff at a Glasgow spirits giant stepped in to raise an astonishing amount of money to cover a day's operational costs at CHAS during our Christmas drive.

Edrington were originally aiming to raise £12,750 - the equivalent of paying for a day (Christmas Day) of CHAS care for children and families across Scotland - to sponsor the giant gold star which sat on top of the Christmas tree at CHAS' Robin House hospice in Balloch.

Thanks to the tenacity of its workforce, they smashed their target to reach an overall figure of £18,750. Staff organised and participated in a race night, football match and a raffle which included five days of annual leave as a coveted prize. They also manned the CHAS Christmas wrapping station at Intu Braehead for a two day shift in December.

"We are immensely proud to be working with CHAS and are grateful for this opportunity to bring joy to the families they help care for at such a special time of year. Our team really went for it over Christmas, with all sorts of fundraising activity that contributed to a spectacular sum that surpassed our initial target by quite some way."

"Communities all over the country went all out for CHAS this past December and this is another fine example of where that money goes. We are deeply heartened by the show of goodwill from Edrington's staff over the festive season, to effectively help us pay for CHAS services on Christmas day itself. They called their fundraising drive 'Project Star' because they were determined to beat every other company in the running.

"On behalf of the babies, children, young people and families that CHAS provided care for on that day, we are delighted to finally present them with the tree's gold star for such a strong collective effort."

Donna Quinn, mother of 11-year-old, Logan, who has a rare neurological condition, said:

"It's expensive to fund the hospice so this means a great deal to Logan and I. "2018 was a rough year for us; Logan was in intensive care on Christmas Eve, so it was a welcome contrast being back in Robin House the next day. The hospice is a warm hug as you walk through the door and I definitely appreciated the extra hugs after quite a difficult week in hospital. It was lovely to see so many familiar faces we've gotten to know over the last eight years; they went above and beyond to make it a special Christmas for both of us.

"When we arrived on Christmas Eve, all the staff were dressed in their jammies. Logan had his own tree and decorations in his room, with a festive box to enjoy. So much thought was put into it for us to enjoy our time, with a large extended family all sitting for dinner together and games in the afternoon.

"Eilidh from the activities team brought in Micky Mouse dressed up as Santa Claus; as an avid Mickey fan, his eyes just lit up. He has a visual impairment but with all the colours he knew exactly who he was looking at! It was so emotional to see his reaction."

"For a wee boy who wasn't well enough to be at home, but could find some comfort at Robin House, I felt fortunate to be celebrating it and was overwhelmed to be asked if we'd like to stay in the first place. It also meant that, for the first time, I didn't have the usual stress of running round preparing for Christmas; we could just enjoy our time together."

Pictured above: Edrington employee Chris Thomson is joined by his family (wife Karen and daughter Claire) and friend Nan MacDonald to shake the bucket for CHAS at Intu Braehead.