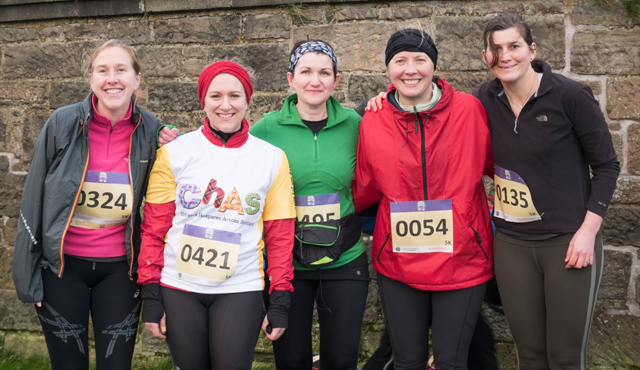 A 21 month-old girl dealing with an extremely rare genetic disorder has united 21 determined mothers hailing from her native Rosewell in Midlothian to take on two triathlon fundraisers for the benefit of CHAS.

Team Esmée, who have been training solidly for St Andrews Triathlon by swimming, running, cycling and spinning since last October, are led by her mother, Juliette Paris-Newton. The family put together this marvellously illustrated video. narrated by Esmée’s big sister, aged 6, to tell their story.

In the wake of COVID-19 and the postponement of the event until September, the team have mapped out a contingency route around Midlothian, including a swim in open water, to squeeze in their own triathlon in April to help keep them match fit for St Andrews. Social distancing will of course be maintained. St Andrews Triathlon has meanwhile pledged to donate 10% of the cancellation fees for those who can no longer participate on the new date to CHAS.

Beyond the 21 mums from Rosewell, family friends from Juliette’s original home country of France and neighbouring Belgium, who are unable to join the team in person due to current travel restrictions, will join them in solidarity with parallel efforts in Marseille, Paris, Reims, Lyon, and Brussels.

Through Justgiving, the group have set themselves a collective goal of £3,000 and are well on the way to smashing their target.

Juliette said: “Esmée's condition is so rare that there are only a few cases in the world and as yet there is no name for it. Our daughter does not see the world like most other children do. She loves to be under trees and lights and to see their shapes and shadows. She has super magic ears (cochlear implants) to help her hear, her heart is not totally in tune, breathing is not always easy, and at the moment she needs special support to sit up.

“Esmée's favourite person in the world is her big sister, and her favourite thing is to laugh at funny faces, particularly if you sneeze and move your head around like an owl. We recently made this video to explain a bit about Esmée's condition and promote our fundraiser.

“We have quite a lot of ups and downs. We have to spend quite a lot of time in the sick children's hospital. We work with a team of specialists who help to look after Esmée, which means we have a long list of medical appointments every month. Esmée has had several operations so far, with more on the way. We have been lucky to receive a lot of support, especially from our close family, friends, and the amazing community of families in Rosewell, Midlothian. Rachel House, part of CHAS, has been a wonderful support, too, since the earliest months of Esmée's life.

“Esmée brought us all together. Lots of parents around us in our village of Rosewell encouraged us to get out and about, and soon I had a crazy idea: training for a triathlon. To help with training we have a running buggy and a kiddy-trailer for the bike. A full team of mums have now signed up for the adventure. We want to raise money for Rachel House to give back some of the generosity we have received so far. We have been overwhelmed with the support from everybody involved.

“As mothers, there are a lot of things in life that we are not allowing ourselves to do. With children, our focus changed and you tend to forget about a lot of the things you used to enjoy. Now we’re all training – swimming, running, cycling and getting fit – our kids love the idea that we’re out and about, having fun. The dads are also being incredibly supportive, putting in the hours and picking up the slack. The community has come together in such a beautiful way. We’re so touched. Being in this situation can be quite isolating so this has meant the world. I think I speak for everyone when I say the benefit the training and focus has had to our mental health is tremendous.”

Sarah Dannfald, Community Fundraiser at CHAS said: “At CHAS we are so privileged to work with so many inspiring families and the Paris-Newtons are no exception! Juliette and Esmée have inspired their friends and family to fundraise alongside them, not only at the St Andrew’s Triathlon but in their local community as well. We are so grateful for the support of everyone involved, it will allow us to continue looking after families like Esmée’s as well as reaching even more families who need us.”