Running the Distance for 'Joe's Toes' 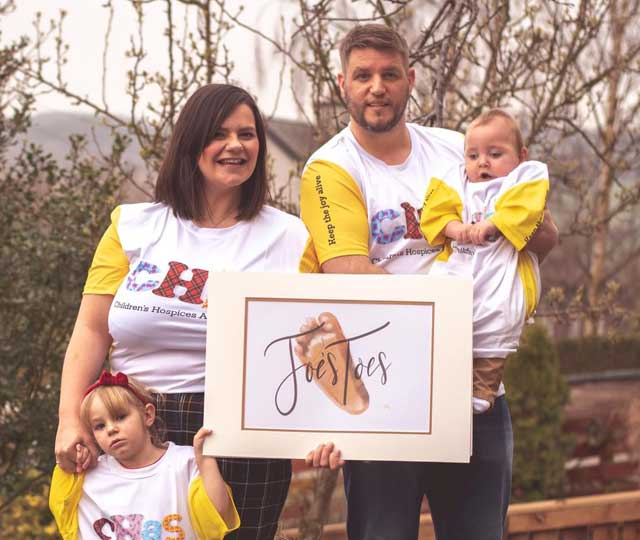 As recently reported on BBC Radio Scotland and ITV News, an Earlston family have rallied support to raise funds for a new memory making project called 'Joes Toes' in conjunction with CHAS.

The funds raised for Joe's Toes will allow CHAS to purchase the materials required to make 3D baby hand and foot-casts, plus special boxes to contain them in, respectfully done in Joe's name. This type of memory making has generally been offered by CHAS within the Hospice, however taking it into the Neonatal Unit is pioneering work, providing another opportunity for parents to make precious lasting memories following the death of their baby.

The Briggs family's fundraising group tackled the Tour de Lauder 89 mile cycling challenge (with an extra 11 miles added on to make it to Borders General Hospital) and will take on the Edinburgh half marathon, the Great North Run, the Loch Ness Marathon and host a ladies cocktail night in the summer. They are currently halfway towards raising their £5,000 target. Anyone wishing to sponsor the project can do so via their Everyday Hero page here.

On 15th February 2018, parents Marie and Keith Briggs (both 36) welcomed identical twin boys to the world, eight weeks early. Thomas Joseph Briggs (Tommy) was born first, shortly before his twin brother Joseph (Joe) who was sadly stillborn as a result of twin to twin transfusion syndrome.

Whilst in NICU the family met Evelyn Rodger, Diana Nurse for CHAS. Initially Evelyn became involved with providing support to the family whilst Tommy was in intensive care and has remained an invaluable support since.

Part of Evelyn's role as Diana Nurse is to provide bereavement support and to help parents find ways to create precious lasting memories with their babies, a role which she clearly feels very passionate about.

Marie said: "Evelyn is a compassionate, kind, gentle woman who is incredibly knowledgeable in bereavement care and we feel privileged that she was there to support us in making cherished memories with Joe and with saying goodbye with no regrets.

"As part of the memory making process, we asked if she would be able to help us take 3D casts of Joe's feet. Evelyn was more than willing to help us in any way she could. Joe's cast is now one of our most cherished possessions and to be able to physically touch, hold, see, something that was exactly his is so very precious.

"Our little Joe has given us, and now other families, so much without even being here. He never drew breath but he has changed us forever; He has reminded us all of how precious and fragile life can be. Every day is a challenge but he has already shown us that we have a strength within us individually and as a family that can move mountains. May he always know how much he was wished for, longed for, prayed for and wanted."

Fiona Leslie, Community Fundraiser at CHAS, said: "Along with Marie and Evelyn, we are currently designing a beautiful box that families will be able to put their castings in to transport home and keep safe. We can't thank Marie, Keith, their family and friends enough for taking on this awesome summer of fundraisers for this particularly special project. The funds they raise and this idea in itself will help bring comfort to so many families. It's a lovely legacy for their little boy."