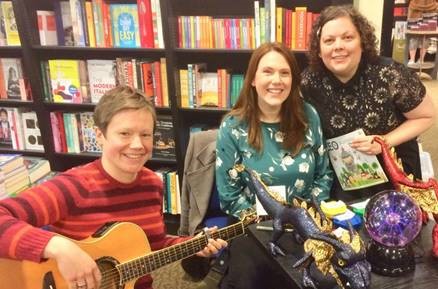 A children's story written by St Andrews mother Gill White as a labour of love for her little boy is to be brought to life with a series of free storytelling sessions taking place across Fife, Dundee and Perth in the coming months, starting on Saturday, 23rd March at Waterstones Perth.

Inspired by her son Leo's fight with a rare form of epilepsy, Gill made him the star of a story, titled Leo and the Lightning Dragons, illustrated by Ladybank artist Gilli B. Encouragingly, critics, parents and libraries alike have taken the book to heart since it was published by Fledgling Press in January. All royalties from sales of Leo and the Lighting Dragons are being donated to Children's Hospices Across Scotland - better known as CHAS.

Leo was born with Ohtahara Syndrome - an extremely rare form of epilepsy which causes seizures and developmental delays. Just three days after entering the world, doctors switched off his ventilator and told Gill and her husband Andrew to say goodbye. Shortly after, Leo fought back and took his first unsupported breath. He has been defying the odds ever since and is now three years-old.

In conjunction with Rachel House in Kinross, Leo and his family receive assistance from the ground-breaking CHAS at Home service. This outreach involves sending trained carers into the community to offer respite and nursing to families either in remote locations or in cases where it's easier for children to be looked after in the comfort of their own home.

Gill commented: "The response to Leo's book has been incredible, I am blown away by the reviews, as well as the support we have received. A reprint had to be ordered only a week after publication, which was just amazing for us!

"These particular events will be great fun for all kids, with colouring in, storytelling, shield and crown making, book signing and music. We also have a selection of sensory items for the kids to play with, which have proven popular so far."

"As well as the book shop and Fife library tour, PAMIS and I are also arranging a number of events for the Leo and the Lightning Dragons Sensory Story, which has been adapted for those with profound and multiple learning difficulties. These events will be starting in early summer, though PAMIS will also be taking the sensory story adaptation around schools for children with additional needs. I'm really excited to see how the kids react to it."

"I was recently invited along to the Scottish Parliament by PAMIS to an event celebrating the successes of the Changing Places Campaign to date. Maureen Phillip and I performed the Leo and the Lightning Dragons Sensory Story to give attendees an idea as to how stories can be adapted to include those with learning disabilities. We were delighted at how well it was received."