We are proud to announce that an independent report by Children in Scotland has recognised that we are improving delivery of, and access to, palliative care through our work in hospitals and communities. They also recommend that our approach should be extended across Scotland. 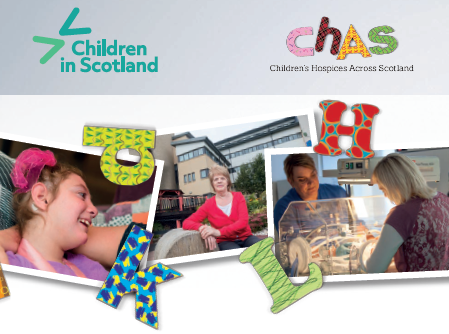 We recognised the need for a permanent, national and integrated approach to children’s palliative care across Scotland. Therefore, from 2014, we employed three nurses to work in hospitals and communities in Glasgow, Edinburgh and the north of Scotland.

We then commissioned an independent report, An Evaluation of the Diana Children's Nurse Service, to look at their success from 2015-2017. This report found that the nurses supported families to make informed choices on their child's care and end of life, ensuring there was on-going support for families from services they would not otherwise have accessed, including bereavement support.

The report further states that the nurses have increased understanding and confidence of children's palliative care amongst NHS staff and has also influenced national and local policy to ensure consistent delivery of, and access to, children's palliative care across Scotland. This includes ensuring the development of national anticipatory care plans for babies, children and young people. Anticipatory care plans are used to support individuals and families in making decisions about their care and end of life needs.

They also helped to deliver consistent policies and approaches to palliative care, including developing guidance, which has been shared nationally, to support parents wishing to have their baby or child at home after he or she has died.

The report concluded: "Capacity should be increased to enable DCN specialisms or nurses with similar skills to roll out across the whole country, and address some of the logistical challenges of working in the North of Scotland, and within other specialisms across the other areas of Scotland."

Sue Hogg, Director of Children and Families at CHAS, said the report confirmed that CHAS' commitment to further increasing its work directly with NHS and in communities across Scotland is helping to improve children's palliative care.

"The Children in Scotland report shows we are providing the right support to those who need us – both families and health care providers, and this is evidenced by families and staff. As Scotland's national children's hospice service we are continually working to increase our understanding of children's palliative care needs and how we can address them.

"This report will allow us to work with our partners to identify where CHAS' expertise and services are best placed to ensure every child and family has access to palliative care when they need it."

Fiona McQueen, the Scottish Government's Chief Nursing Officer, said: "This report shows, not only the value of palliative care for children in Scotland, but the real impact Diana Nurses have had in improving care for families at such a critical point in their lives."

Jack Edmond, and his parents Nicola and Bruce, from Aberdeen, were one of the families supported by the DCNs. He was diagnosed with a rare, life-shortening genetic condition shortly after birth.

Bruce Edmond said: "Shortly after his diagnosis, a CHAS Diana Children's Nurse came to talk with us in our local hospital. That meeting was to change the course of Jack's life and how we as a family would deal with it. Through talking with her, it became clear to us that whilst Jack was going to die, he still had so much living to do. After receiving such devastating news, we started to see a future, we could see things that we could achieve."

In 2015, the Children in Scotland Requiring Palliative Care Study was commissioned by CHAS and the Scottish Government and showed that there are 15,400 babies, children and young people in Scotland with a life-shortening condition and that three will die each week. The two reports are the first studies of their kind into children's palliative care and are developing understanding for CHAS on how it can best deliver its services across Scotland to reach every family.

Download the "An Evaluation of the Diana Children's Nurse Service Report" [PDF, 1.55MB]