Dunfermline cyclist Ross Duncan is exhilarated to have reached an incredible 5,569 miles - or 8,962km - as he crashes through the halfway mark of a gruelling 125 day ride in aid of Children's Hospices Across Scotland. 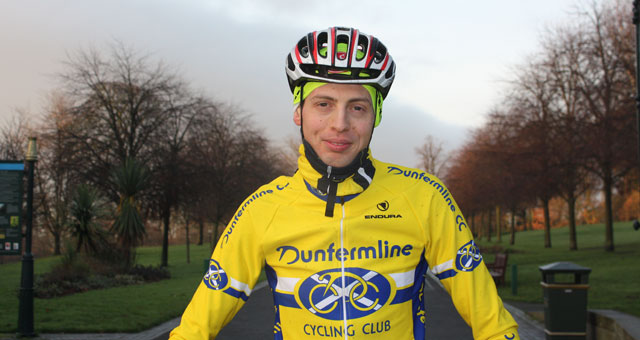 Ross, a 32 year-old IT Technician, aims to total 15,404 km by the time he's over the finish line in eight weeks' time. His goal is to raise a pound for every kilometre cycled, representing every baby, child and young person in Scotland who currently has palliative care needs. He's in good shape at the moment with over £3,000 raised via his JustGiving page.

His efforts have now attracted the attention of record breaking cyclist, Mark Beaumont, who said: "It's wonderful to see the massive effort from Ross on his endurance cycle. I know what he is going through mentally and physically, and I am sure that the hundreds of positive messages and money raised for in CHAS will be a huge help to keep him going.

"CHAS provide such wonderful palliative care for babies, children, young people and their families, so much like Ross's mileage, I'm sure his fundraising efforts will go a very long way!"

On 18th of December, Ross embarked on a personal challenge to cycle an average of 124km per day for a gruelling 124 consecutive days in an effort to raise vital funds for the national charity that keeps the joy alive for children with life-limiting conditions and their families.

On the 125th day, Ross aims to complete hill repetitions totalling an ascent of 15,404 ft. He is undertaking the challenge in a combination of outdoor riding and (when the Fife winter becomes prohibitive) using a state-of the art indoor terrain simulator called Zwift.

The local cycling community has also rallied to give Ross the support he needs to complete the challenge - Dunfermline Cycling Club provided a training kit, while Nicholson's Cycles in Dundee (where Ross was originally raised) have sponsored a resilient new road bike to take on the task. Ross will lead a 'lap of honour' ride to Rachel House with supporters from Pittencrieff Park in Dunfermline to Rachel House, Kinross on Sunday, 21st April.

Just one day's care in Robin and Rachel House is £5,650 each and it costs CHAS £12,750 every day to provide care in hospices, homes and in hospitals. In December alone, CHAS spent more than £400,000 to make sure children and families get to enjoy precious time together in a relaxed, caring and joyous environment.

You can sponsor Ross at www.justgiving.com/fundraising/124-4-124.