A nurse with over 30 years' service who works for Children's Hospices Across Scotland - better known as CHAS - is to be awarded the prestigious title of Queen's Nurse by the Queen's Nursing Institute Scotland, in a ceremony held in Edinburgh Thursday, 29 November. 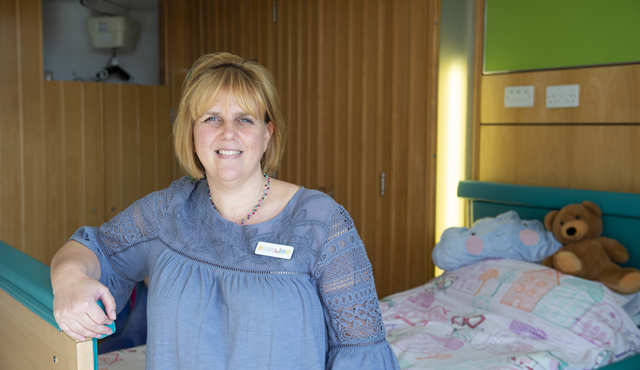 Caroline Porter, based at Robin House in Balloch, was selected earlier this year to take part in a nine-month development programme run by the Queen's Nursing Institute Scotland (QNIS). She was nominated for bringing compassionate palliative care nursing expertise to babies, children and young people and their families.

After completing the programme successfully, Caroline was awarded the historic Queen's Nurse title along with 20 other community nurses. It marks only the second time the honour has been made in Scotland in almost 50 years following the reintroduction of the title in 2017. Caroline has therefore become the first nurse in Scotland to hold both Diana and Queen's Nurse status.

As a nurse who specialised in paediatric intensive care for the first decade of her career, Helensburgh native Caroline became a Diana Children's Nurse (DCN) - named in honour of Princess Diana to commemorate her life and work - when they were established four years ago.

Caroline now covers five health boards across the West of Scotland, providing a vital liaison between hospitals and CHAS to support families with children with life-shortening conditions. She advocates for increased access to specialist palliative care in wherever it is needed.

Two years ago, Caroline became the co-chair of the Scottish Children and Young Peoples' Palliative Care Network and in that time she has chaired the development of national guidance on taking a child home after death and is part of a steering group to develop a new national managed clinical network.

Caroline said: "I feel privileged to do the job that I do. I learn so much from the children and families that I meet, their resilience and strength in the face of such adversity is truly inspiring and drives me to do the best I possibly can for them.

"At the heart of my role is identifying the hope that can be found, even in the worst of situations. One mum said to me that I gave her hope when all around her people were taking it away - it's about instilling confidence in parents when they feel like there's nothing else that can be done.

"We can't save their child's life, but what we offer instead is an environment where they can do something lovely with their child to create precious, cherished memories that will endure."

In Scotland, more than 15,000 children and young people live with life-shortening conditions and CHAS is determined to reach every family who needs its services. CHAS works across Scotland, able to provide its hospice services nation-wide for babies, children and young people with life-shortening conditions. CHAS offers palliative, respite and end-of-life care from Rachel House in Kinross, Robin House in Balloch and through CHAS at Home.

The CHAS at Home service supports families with the services of a hospice yet in their own homes across the whole of Scotland. Through its Diana Children's Nurses working in hospitals across the country we support families and clinical teams.